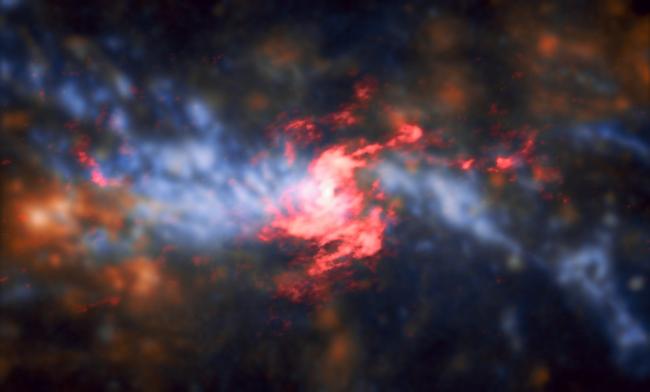 A false-color image of the central region of the active galaxy NGC 5643 as seen with the ALMA millimeter array. The spiral disk is seen in the light of molecular gas in red, and the outflowing hot gas in blue-orange. The emission shows a circumnuclear disk and torus at the core. Astronomers have used the Chandra X-ray Observatory to image the X-ray emission from the nuclear region and, together with ALMA results, confirm that the structure is the circumnuclear disk and torus.

Most galaxies host supermassive black holes at their nuclei, each with millions or billions of solar-masses of material. There is thought to be a torus of dust and gas around the black holes, and an accreting disk that becomes very hot as material falls onto it, in turn heating the torus and circumnuclear gas and dust. Such an active galactic nucleus (AGN) radiates across the spectrum while the dust often blocks the innermost regions from view. Powerful bipolar jets of charged particles are often ejected as well. Radiation from the torus can be seen directly at infrared wavelengths and, when it scatters off the fast moving particles, at X-ray energies.

Active galactic nuclei (AGN) are among the most dramatic and interesting phenomena in extragalactic astronomy. All of the standard AGN models predict the presence of a torus and accretion disk but the details of the region have been difficult to study directly because the torus is thought to be relatively small, only hundreds of light-years in size. The ALMA millimeter array, however, has recently enabled detection of nearby AGN structures in both continuum and molecular line emission. NGC5643 is a face-on spiral galaxy that hosts an AGN and bipolar jets. Last year ALMA spotted an elongated structure in its nucleus about eighty light-years across (about 200 light-years across in emission from the cooler molecular gas component). Scientists had proposed that the structure was the expected AGN torus and the related molecular material responsible for the obscuration of the AGN and the collimation of the jets.

CfA astronomers Pepi Fabbiano, Aneta Siemiginowska, and Martin Elvis and a colleague have now used the Chandra X-ray Observatory to image the region and its torus in X-rays. Looking at the energy of a bright X-ray line of iron, the team finds a structure about 200 light-years in extent that coincides quite well with the molecular structure. It appears to be clumpy, and that feature together with its size and the estimated density from the ALMA observations suggest that it is the circumnuclear disk. This is the first object for which both Chandra and ALMA have identified the critical torus; of added significance is the fact that the two observations span the range from X-ray to millimeter wavelengths. Normally these very different bands sample respectively extremely hot or extremely cold material arising from very different regions, but AGN make for a very complex neighborhood.

"Chandra Detection of the Circumnuclear Molecular Torus of the Compton-thick Active Galactic Nucleus in NGC 5643," G. Fabbiano, A. Paggi, A. Siemiginowska, and M. Elvis, ApJL 869, L36, 2018.