The Distribution of Globular Clusters 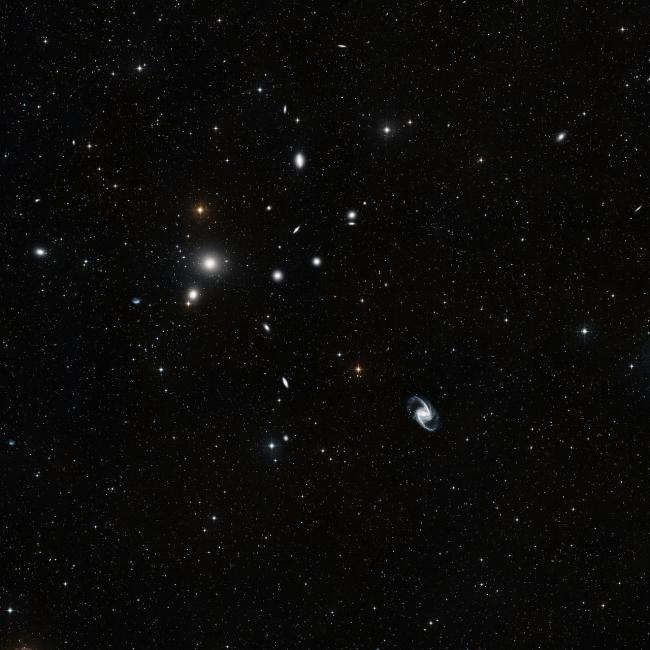 An optical image of the Fornax Cluster of galaxies. Astronomers have analyzed the distribution of over eighty thousand globular clusters in the region to infer an active history of galaxy-galaxy interactions.

ESO and the Digitized Sky Survey 2

Globular clusters are gravitationally bound, roughly spherical ensembles of stars. Some contain as many as a million stars, and their sizes are as small as only tens of light-years in diameter. Globular clusters are typically located in the outer regions (the halos) of galaxies, and our Milky Way galaxy has about two hundred of them. Astronomers are interested in globular clusters in part because they are home to many of the oldest known stars, but also because of their locations in the halos.

Collisions between galaxies are commonplace, and the locations of globular clusters can offer evidence of these encounters because they are strongly affected by such interactions. During a collision, a galaxy can grow by absorbing or merging with its neighbor, and some models even predict that clusters form during these interactions. Moreover, it is possible that in a merger large numbers of globular clusters originally belonging to a smaller galaxy may be captured by a larger one. The distribution of globular clusters around a galaxy holds therefore clues to their origins and to the history of the host galaxy. There is an additional benefit: Standard models of cosmology make predictions for how galaxies form and evolve that depend on fundamental properties of the universe like the amounts of dark matter and dark energy. The properties of globular cluster, mostly determined by the accretion histories and mergers of their host galaxies, also reflect the values of these fundamental cosmic quantities.

CfA astronomers Pepi Fabbiano and Raffaele D’Abrusco (now at the University of Naples) and the other members of the Fornax Deep Survey (FDS) collaboration studied the globular clusters in the core of the Fornax Cluster of galaxies, a complex of over fifty galaxies located about sixty million light-years away. Using optical and near-infrared images taken with the European Southern Observatory Very Large Telescope's Survey Telescope, the scientists cataloged over three thousand globular clusters throughout Fornax (about two-thirds of them previously unidentified), providing a rich resource for structural analyses. They find clear evidence for an active history of galaxy-galaxy interactions, for example in bridges between galaxies, elongated groupings, and other unusual arrangements. While these results by themselves do not refine the values of any cosmological parameters, they are consistent with the standard models, and help complete the evolutionary description of this massive nearby cluster of galaxies.

Optical and Infrared Astronomy
JADES will use guaranteed time in James Webb Space Telescope (JWST) cycle 1 to produce infrared imaging and spectroscopy of unprecedented depth in the two premier extragalactic deep fields, GOODS-South (CDF-S) and GOODS-North (HDF). These data will reveal the early phases of galaxy formation, probing the rest-frame optical spectroscopy and morphology of galaxies from redshifts 2-3 out to z>10. JADES expects to collect data on about 100,000 galaxies, adding to the extensive legacy of these well-studied fields.
1