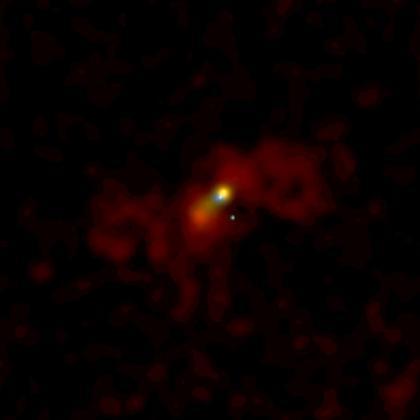 A Chandra X-ray image of the ultraluminous merging galaxy Arp 220. Astronomers studying the X-ray emission have concluded that accretion onto the supermassive black hole nuclei contributes only a modest amount, compared with star formation, to the galaxy's luminosity.

The galaxy Arp 220 is ultraluminous (defined as having more than about 300 times the luminosity of our own galaxy) and, at a distance of only about 260 million light-years, is the closest ultraluminous galaxy to our Milky Way. Even more dramatic galaxies can have luminosities as much as ten times brighter, and astronomers are still piecing together the reasons for these huge energy outputs. The two primary suspects for the energetics are bursts of star formation that produce many hot young stars, or the accretion of material onto the supermassive black hole at a galaxy's nucleus - an active galactic nucleus (AGN). As the closest example, Arp 220 is one of the best places to probe these different scenarios; however, observations are difficult because whatever is powering the activity in Arp220 is heavily shrouded in dust and the nuclear region is invisible at optical wavelengths.

The starburst explanation should produce many hot young stars with abundant ultraviolet light and supernovae resulting from the deaths of the most massive and short-lived stars. The AGN explanation will produce hotter gas with more X-ray emission and characteristic spectral features. So far signs of both processes have been detected. Astronomers generally have concluded that stars are being made at a rate of about ten thousand solar-masses per year, dominating the luminosity, and that the AGN contributes only modestly to the output, less than 25%.

Adding to the appeal and mystery of Arp 220, however, is the fact that it is a merger of two galaxies and its two constituent galactic nuclei are approaching coalescence, currently being only about one thousand light-years apart. This makes the relatively small AGN output puzzling: Simulations of galaxy mergers suggest that as the nuclei get close together their accretion soars and their luminosity dominates the emission, even exceeding 80% of the total. Moreover, observations of supermassive black hole nuclei in general find that they are systematically larger in larger galaxies, something that would be expected if, as galaxies grow in a merger, their black holes also grow from accreting matter and radiate as they do so.

CfA astronomers Alessandro Paggi, Giuseppina Fabbiano, Guido Risaliti, Margarita Karovska, Martin Elvis, W. Peter Maksym, and Jonathan McDowell and two colleagues obtained new data using the Chandra X-ray Observatory which, combined with archival Chandra data, allowed them to identify in X-rays two locations of extremely hot atomic iron and potassium emission that coincide with the two nuclei. The lines can be produced either in supernovae (a consequence of star formation) or by an AGN. The scientists analyze these and related data to conclude that supernovae are most likely the primary source of the emission, and that, in agreement with earlier results, the AGN contribution is only modest. They also estimate the masses of the two black holes as being relatively modest, only about ten thousand solar-masses each. One implication of this paper is that the merger has not yet progressed to the stage in which active accretion onto the black hole lights up the galaxy.

Making Stars When the Universe was Half Its Age