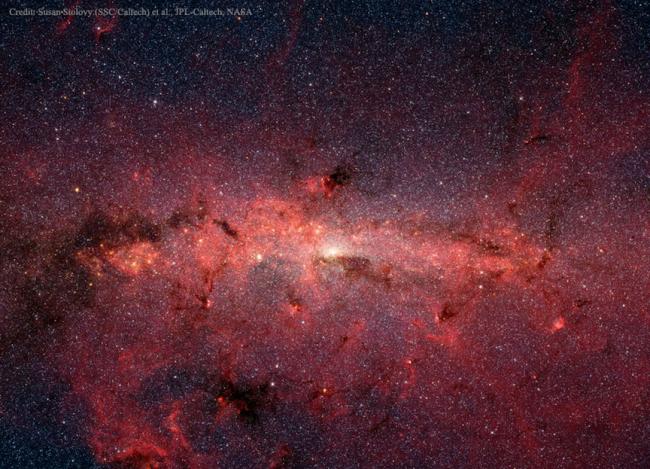 An IRAC/Spitzer Space Telescope infrared image of the center of our galaxy. The infrared penetrates much of the dust to reveal the stars of the crowded galactic center region. Older, cool stars are blue; reddish dust clouds are associated with young stars in stellar nurseries. The galactic center lies some 26,000 light-years away, toward the constellation Sagittarius. The image spans the region called the Circum-Molecular Zone, and new simulations appear to have resolved some of the mysteries around the nature and evolution of molecular clouds in this zone.

Stars form from the gas and dust in molecular clouds via a series of complex processes that are currently only partly understood, and the evolution of these clouds drives the evolution of the stellar populations in the universe. Astronomers studying the formation of stars have, over the past decades, concentrated on a few select regions of active star formation: the solar neighborhood, the disc of the Milky Way, and the neighboring Magellanic Cloud galaxies. This range of environments is limited, however, and not representative of the conditions under which most stars in the Universe formed. For instance, the densities, pressures, and motions of the gas in these local environments are considerably lower than those thought to be present during the time of peak cosmic star formation about ten billion years ago. Moreover the disparate conditions make it difficult to untangle evolutionary effects.

Recent Galactic plane surveys at a wide range of wavelengths using facilities like the Submillimeter Array and ALMA telescopes have made it possible to study cloud evolution and star formation in the Central Molecular Zone (CMZ), the central 1500 light-years of the Milky Way, whose extreme physical conditions more nearly resemble those at the peak of cosmic star formation. CfA astronomers Eric Keto and Qizhou Zhang and their colleagues carried out a series of computer simulations of massive molecular clouds in a CMZ environment with the goal of characterizing their morphological and kinematic evolution as they orbit the galactic center in this dense, complex region. These computations are the first specifically aimed at modeling the clouds in the CMZ ridge and were designed to compare against recent observations.

The team finds that the CMZ environment causes the clouds to be compressed, with stress and shear forces fragmenting them and developing features such as filaments and spinning, pancake-like structures. The simulations are able to reproduce key observed features like the "Brick," a very dense, flattened molecular cloud that, despite its dense gas, lacks star formation activity; the simulations can mimic its general morphology, inclination, and velocity gradients. The results reveal that the evolution of molecular clouds near galactic centers is closely coupled to their orbital dynamics. When accompanied by accretion of gas, these clouds can evolve to produce the starbursts observed in many galactic nuclei.