Interstellar space — the region between stars inside a galaxy — is home to clouds of gas and dust. This interstellar medium contains primordial leftovers from the formation of the galaxy, detritus from stars, and the raw ingredients for future stars and planets. Studying the interstellar medium is essential for understanding the structure of the galaxy and the life cycle of stars.

The Contents of Interstellar Space

Most of the space between stars is much emptier than the best vacuum we can make in a lab on Earth. However, it’s not truly empty: the interstellar medium (ISM) is complex, with a variety of physical processes governing its behavior. This is the place where stars are born, and where stars recycle their atoms when they die.

Hydrogen and helium make up about 98% of the mass of the ISM, with the remaining 2% being heavier elements like carbon, oxygen, and other elements astronomers call “metals”. Most of these atoms are in the form of gas, but about half of the heavier elements form dust: relatively large grains composed of carbon-containing molecules. These include polycyclic aromatic hydrocarbons, which on Earth are often produced by burning organic matter: their smell is the smell of charred hamburger on a grill. Even though dust only makes up about 1% of the ISM, it’s very good at absorbing visible light, particularly toward the blue end of the spectrum. As a result, starlight shining through a cloud of dust appears redder, and sometimes can be blocked entirely. For that reason, astronomers study these dust clouds in radio and infrared light, which passes through dust clouds more easily.

The ISM is made up of many parts: 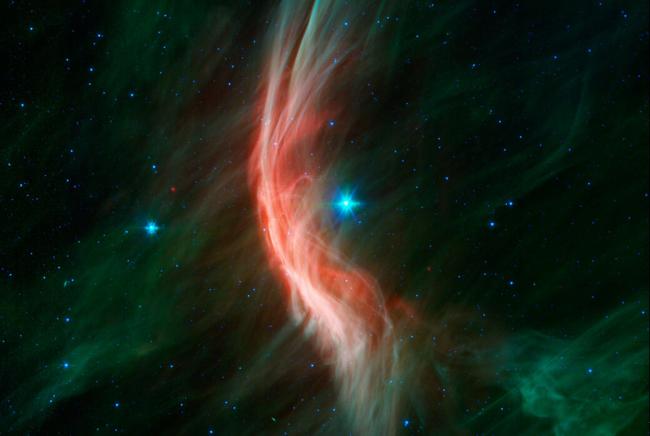 The rapidly-moving giant star Zeta Ophiuchi produces a shock wave in the interstellar dust, as seen in this infrared image from NASA's Spitzer Space Telescope.

The Milky Way is full of clouds of gas and dust, which are the places where new stars and planets are born. These molecular clouds clump together and break apart over time, such that understanding their evolution requires observing them at various stages of their lives. However, much of the light emitted by these clouds is blocked by Earth’s atmosphere. To get above most of the light-blocking air, NASA’s Stratospheric Terahertz Observatory (STO) is an infrared telescope flown on a special high-altitude balloon 40 kilometers (25 miles) over Antarctica. Center for Astrophysics | Harvard & Smithsonian researchers were involved with the development of the first STO mission, which flew for 14 days in 2012; the second mission, STO2, operated for three weeks in 2016.